Biannka : The things you remember (and forget)

The last time I was in India was in 2005 – eight years ago.  Back then, I felt an insistent pull to India. My fascination with India didn’t make sense to my family, my friends or me really.  India was a country that mesmerised me.  Whilst travelling around, I was blown away by India’s contrasts, the poverty, the wealth; the beauty, the pollution; the fancy, the derelict; the orderly chaos…  In a country that is full of contradictions, I too felt a mix of emotions; stirred constantly by a barrage of unfamiliar sights, sounds, and smells.  I left India with a longing for the same contentment and joy that I saw from people who invariably had far less (stuff) than I did.

I was looking forward to more of what India had to show me.

Unfortunately, flying high in the sky somewhere between Cairns and Sydney, I suddenly remembered something very important…I had forgotten…my mat.  Yep, I was travelling to India to practise yoga for two months and I forgot my mat!  I did however remember my Zen Ointment for my anticipated aching muscles, my magnesium, my Camu Camu, my torch (a must have, thanks Mum x), my Chlorella, my amethyst necklace – but no yoga mat.  After some extended internalised panic, I surrendered (I had to) to the fact that I had not an inch of control over it… no biggy (I told myself), I would just have to work something out – without knowing, this was a good introduction to my life in India.  I’m sure my family won’t let me forget this one easily…

Having travelled to India before, I really wasn’t expecting any culture shock.  Arriving in Mumbai however, I was confronted by a heavily populated and congested airport, a language I didn’t understand and lots and lots of noise.  I was suffering some serious culture shock and began to  wonder why I had decided to travel so far for yoga…  Travelling in a taxi to my hotel for the night, I was reminded of the very sophisticated system of horn beeping.  Beep beep I’m about to pass you; beep beep, I’m passing you; beep beep, can you move to the left you’re in my way – it’s great!

With an overnight stay in Mumbai, I arrived in Goa the following day.  I hadn’t organised any accommodation but thankfully I had been given a heads-up on a place to stay by Alex (a L&BY yogi) who had been in Goa a few months prior.  I had forgotten to negotiate a price for the accommodation and said “yes” to the first price the landlord suggested.  It was the hot water that really sold me.  The bartering will take some getting used to.

Before venturing out, I thought I would unpack my bags and put my clothes in the wardrobe rather than live out of my suitcase – I was going to be here for a month after all.  I placed the first lot of clothes on the shelf and realised the shelf was made from styrofaom.  Taking a step back, I realised the whole wardrobe was made from styrofoam and just for ‘show’.  Ahhh… ok I would live out of my suitcase – no problem.

The next day was my first practise with Rolfe and Marci; starting time was 7:15 – nice.  As I walked through the Shala gate I saw there were about 5 people waiting downstairs on a seat.  I learnt this is where you wait until there is some room upstairs in the Shala to practise.  The Shala is on the roof of Marci and Rolfe’s house with a corrugated iron roof and woven mats to cover the concrete floor.  I had contacted Rolfe and Marci via email regarding my ‘mat issue’ and they were happy for me to use a Shala mat until I found one to buy. ‘One more’ I heard Rolfe yell.  I think it was at that point I realised I was in India and I was suddenly excited and very nervous.  Then it was my turn.  Up the stairs I went – tripped two-thirds of the way up (this one stair will be the measure of how awake I am in the morning; it is a little higher than the rest but no-one else seems to notice..), I introduced myself to Rolfe and rolled out my mat.  The Shala was full.  On your first day, you do primary only and Rolfe and Marci observe your practice.  I was really distracted throughout my practice and in resting pose, I realised I had forgotten both Purvottanasana and head stand! What?!  I felt tired; my practice was awkward and clunky – but I was in Indiaaaaaaaaaa and would have a teacher for two months! Best ever.

Scooter riding is a must!

Cows in India are cool 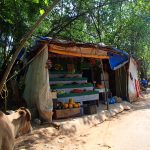