I was up quite a few times during the night and had to be up around 3:30am so I didn’t get much sleep before heading into my first class. I was given the 4:30am class time (4:15am Shala time) and even though I was pretty tired I was very excited too. We wait at the gate out the front of the shala waiting for the lights to come on and the doors to open. Once the doors open there is a surge of folk trying to get into the shala before all the mat spots are taken – if you’re not quick you end up practicing in the changerooms, which is ok but obviously not ideal. Once in and on my mat its feels as if I never left but at the same time feels like a long time and a lot has happened since we were here in 2008. The main thing is that Guruji is no longer here. Sharath comes in and announces “Samastithi” and we all stand for the opening mantra. The vibe is electric! Then we start and the sound of the breath of about 80 students all inhaling and exhaling at the same time is almost deafening! Amazing! It was so wonderful to be back…all my tiredness just left with that first breath. I was expecting to be completely wiped out by this first class however I think practicing in the Townsville heat has given me extra strength and stamina (as I didn’t even start to sweat until the seated postures!) so the class was actually just loads of fun!

There is the coconut man that has his wee coconut van out the front of the shala every morning for the students so I met Judi and Cathy (another friend from Glasgow – the three of us all taught at the same studio) for a few coconuts (12 rupees each!) Ahhhh fresh coconut water straight after practice – does life get any better!?

Conference is also on Sundays where Sharath gives a talk and then the students can ask questions. He spoke about many things but the main thing for me was that he said that we don’t ‘do’ yoga but instead yoga comes from within. It is already there and through the asana’s, breathing, yama’s and niyama’s (and all the other limbs of Ashtanga Yoga) the yoga (or union or knowing yourself) blossoms. This is what I love about yoga. The belief that we are already perfect, already complete, everything we do is enough…it’s just we lose our way sometimes but through the practice we start to rediscover it, remember who we really are. He was very funny and made a few jokes about people writing on their facebook about what postures they are doing etc There are a few other blogs out there that give detailed accounts of the conference so if you’re keen to know all the details check this out http://earthyogi.blogspot.in/

All is all a fantastic first day in the shala and I cannot wait for tomorrow’s Mysore class! 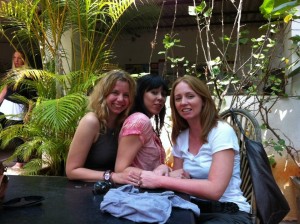 Glasgow Ashtangi’s (Judi, Cathy and me) in Mysore!