Gabi : About to fly out to Mysore

Gabi heading off on an adventure

My name is Gabi and I am currently in my final year of my PhD. I started practicing yoga years ago, when I was 17. It was offered as an alternative sport at school for those of us who weren’t competitive. Except I was competitive, and quickly switched sports when I realized I wasn’t the bendiest in class. I then tried Iyengar yoga was I was 20 and adored it. Completing two 12-week courses. And then my teacher left and the studio switched to Shadow yoga, which wasn’t for me. So I stopped yoga except for the occasional class at the gym when I thought I needed a stretch or my core needed to be kicked into gear. Then, in 2011, one of my friends at Uni gave me a voucher for Live and Breathe. I had never practiced Ashtanga but figured it couldn’t be that different and I figured that, with all the time I spent at the gym, I could do with a good stretch. So I went. Three years later and I am still practicing ashtanga.

Initially when I started practicing with Alison and Harry, Ashtanga was a purely physical thing. I wasn’t into the fluffy stuff. I didn’t care so much about the mantras and wouldn’t say Namaste or Om Shanti. In my voice at the time it sounded wrong, artificial. My practice continued on a semi-regular basis. I was getting better though incredibly slowly. I would get annoyed at my non-progress and focus on another activity for a while, usually bike riding, though sometimes my endeavor to become a runner. I was also constantly checking on other peoples poses to see how I ranked in the bendy scale, and frustrated that I couldn’t (Still can’t) do a head stand.

In 2013 I decided that my challenge to myself for the year (Resolution if you like) was to complete a mysore style intensive. Luckily Ali ran one early in the year. By the end of that week everything had changed. My concentration, my focus had shifted. I was working on my own poses. I learnt the opening and closing mantras. Over time,  I stopped skipping postures, I started doing a vinyasa after each side, I now jump back into chataranga and forward after down dog.  I concentrate, I meditate, I can do 5 navansanas with both feet off the floor! As yoga moved from being a purely physical into a combination of mental and physical (like the connection between breath and movement, vinyasa) everything started to flow. And importantly I started to feel the effects outside of class, and not just the sore muscles. Since completing that first mysore intensive, ashtanga has become a part of my life. As I close the chapter of my PhD, I decided to start the next chapter with a clean slate. I made the decision to chase the feeling of steadiness and flow and calm that I feel in class and booked in to study Ashtanga in Mysore. So here I am. Sitting at Melbourne Airport a half hour from boarding my plane to Mysore. I am so excited. And equally nervous. But also ready. This time I am physically and mentally ready for yoga and I am going to enjoy every single second of it. 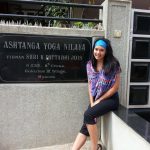