I heard Kino MacGregor once say “If you ever get the chance to do a Led Second series class with Guruji, DON’T!”  This is what kept me awake….

I arrived about half an hour before the class and there was already about 10 people sitting on the stairs waiting.  I grabbed a spot on the stairs and chatted nervously to my pal Richard who was also a first timer like me – we both had a dazed look of nervousness, excitement and fear all at the same time.  When it’s time to go in I was so relieved to find that there was no pushing or shoving to get in the door like there is when its the Led primary series class…everyone just got up and slowly made their way one by one in the door (in defence of the Primary series class, this class is soooo busy, with about 70-80 people attending, and if you aren’t quick you end up in the change rooms or in reception – still no excuse for the surge and the shoving though!).

I got a great spot right over in the back which was exactly where I wanted to be.  The Led Intermediate class is the only class where students who are not participating are allowed to watch the class from reception.  I definitely did not want my first class to be in front of the gallery!  And so it began…I tried to take it as slow and as easy as I possibly could for as long as I could but pretty much as soon as we were into the first posture after standing, pasasana (pictured below), my heart was racing! 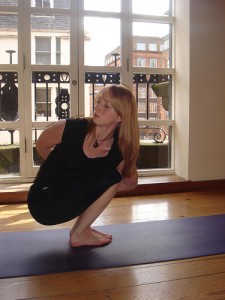 Pasasana…Its a lot harder than it looks!

I wonder how I am going to survive if I’m already running at this level!  Of course, the postures I find challenging, Sharath counts slooooooooow which makes me work harder than I ever have before to find my breath, keep it together and stay on the count.   I finish the posture I was given to do last week and once I’m done, I started to get up to move to the back of the room to do my backbends (because Led Second is so demanding, a lot of folk do not do the whole thing and so when you finish the posture you are working on, you move to the back and complete you practice in your own time…so it’s a bit of a combination of Led class and Mysore class) Sharath sees me get up and says, ” No, you do!” so I sit back down and start the next one!  Eek! Honestly, my heart was beating outside of my chest and my breath was all but gone…once I tried that one Sharath looked at me (he was standing right at my mat now), with a big grin and waved me down like the Umpire does in a baseball game when the player  is OUT!  I’m done!  Thank goodness!  My entire body is sore,  I sweated like I have never before (yes even more than in January in Townsville!!) but I’m so happy and relieved I did it.

I’m constantly amazed at the human body and it’s capacity to do so much more than we give it credit for. As long as we treat it well, with kindness, and become astutely aware so that we can listen to what it tells us, but also have the belief that anything is possible, we can do so much more than we think.  It’s usually our mind that’s says No when our body is saying YES!

If you had told me years ago, after I had my accident where I badly broke both my arms and had to be filled with metal pins and plates and screws, that one day I would be able to lift myself up off the floor on my hands, with both legs behind my head and stay there until an Indian yoga teacher said to come down, I would have thought you were crazy!  But there I was…doing it!  And even more crazy, loving it! The beauty of this practice shows us that if we do it with discipline, kindness, and a whole heart , anything is possible!  This practice can heal your injuries, make you strong physically and mentally but most importantly give you belief in yourself so that you can carry that belief out into your day.